skip to main | skip to sidebar

Lady Vashj - our number one fan favourite fish for many moons now, has tragically met her unfortunate end tonight.

Early reports suggest that she was attacked by a mob of around 20 people in what Azerothian NPC's (Nasty Police Characters) are calling a savage and brutal murder.

So far the Mob has yet to be apprehended and caught but the NPC's have released this photo discovered at the crime scene.

(warning the image is graphic and may frighten younger audiences) as you can clearly see this is the handy work of the notorious group Phoenix Legion, who have been linked to a number of murders of late, the NPC Alliance does not seem to be able to stop their violent rampage.

We held an interview with a close personal friend of Lady Vashj, a (self declared) Prince Kael'thas Sunstrider, a respected member of the community of Outland

K- *sob* This act was commited out of sheer maliciousness, i want to see Phoenix Legion brought to justice! if the NPC alliance was any good at their jobs they would have sent Hogger after PL long ago!

Q- Well im sure you want justice. but i hear Hogger is a little busy in Northrend at the moment, something about recruiting Arthas into the NPC Alliance. We have heard some currently unconfirmed reports that Phoenix Legion have got you next on their target list, does this frighten you at all?

K- Frighten? it terrifies me! in fact i don't think Ive left my Keep in nearly a year!, and with this tragedy i intend on locking the door! Only a very few raid boss dare walk outside their own homes these days.

Q- thank you for this interview Sir Kael'thas

So there you have it folks, Phoenix Legion have downed lady Vashj, and are now setting their sights on Prince Kael.
Posted by Sam Hadfield Posted Tuesday, May 20, 2008 2 comments:

Shade Of Akama Down! Our Progress streak continues with the Shade of akama, this one wasnt easy since we really didnt have the ideal raid setup, only 1 mage for CC :<
Grats Phoenix Legion Once again for great progress! 3/9 BT!

Some people had to leave after this so we decided to clear up to Teron 22 man, Hillarity follows with the most painfull wipe i think we ever experianced, Teron is a hard nut to crack it seems. We called it a night, and most probably a week here since we are headed off to Vashj on monday and dont do 25 man raids at the weekend.

However i think that we should have no problem reaching Teron Gorefiend again next week with the little trouble the first 3 bosses gave us, so ive been reading up on the tactics Here, Also on our forums was linked an interesting little mini game designed to give the player a "mini" experiance of the ghosts on the Gorefiend encounter, it is exactly right, but it does the job of giving you a basic understanding of what needs to be done in the short time you have as a ghost. Check out this minigame Here!

Fun night, even with many many wipes included.
Posted by Sam Hadfield Posted Saturday, May 17, 2008 No comments:

Progress, thy name is Phoenix legion Wednesday: Full Clear of KZ in just over 3 hours, Niiiiice took me to 100 badges exactly, got my badge trousers

Thursday: A day to be rembered, Our first ever look inside BT - And what a night, Najentus, Downed, and not just that, DOWNED FIRST TRY. Thursday: Not much later we were wiping on Supremus, but before long we had another notch on our already bloodstained belt im on a stupid high at the moment so im going to leave you and go celebrate with my guild - pheonix legion 2/9 BT :D
Posted by Sam Hadfield Posted Thursday, May 15, 2008 1 comment:

today i bring you a story of a AV last night that was just a little bit different from the norm.

i was happily in AB, carrying on with my rep grind (80 more games to win) when a guild mate starting shouting about a AV that he was in being "bugged", and that there were no NPCs, No reinforcements, No mana/rage/energy costs and nobody could die. Of course i had to see this for myself, So after my AB was finished i joined AV29 - to play with my friend.

He was almost right. The AV had bugged with the preparation buff still active after the gates had opened, there were indeed no NPC's and no energy costs on moves, He was wrong however, about not being able to die.

People could die, they took damage, its just that their health Regen was roughly around 10,000 per 5 seconds, even in combat, making killing people a very hard thing to do.

This was the most Epic AV ever! i spent around an hour zerging around with the rest of horde on the field of strife destroying alliance, barely nobody left the game because it was the most fun anyone in there had had in ages, so after joining about 30 minutes late, and playing an hour of this AV, i checked the score board, i was pleasantly surprised. 1.25 MILLION damage, and a clear 400,000 more damage than the person below me, and even better than that (in my eyes anyway) the top alliance damage dealer was from Eonar as well, Nerf us!
Posted by Sam Hadfield Posted Monday, May 12, 2008 No comments:

First of all, a big sorry for not posting in the last...err...long time, I've been crazy busy with Raids, and exams that are coming up, but i promise i have 3 really big posts in the works. They should be done soon for you, but until then you will have to do with this awesome new update to my rogue life.

My Guild, being the crazy bastards that they are, Have promoted me to the rank of Rogue Class Leader! YaaaaaaY

i now have access to certain rights and privileges, and of course some extra responsibilities (but good ones)

Let's look at what i *can* do now:-
But of course with all that comes
All in all, Quincey is a happy rogue again, and i am looking forward to abusin......i mean, responsibly using my new admin powers ;)
Posted by Sam Hadfield Posted Sunday, May 11, 2008 1 comment:

Blogs to check out

As the more attentive of you may have noticed i have added 2 new blogs to my reading list:-

(Time to break out that good old Mspaint again) 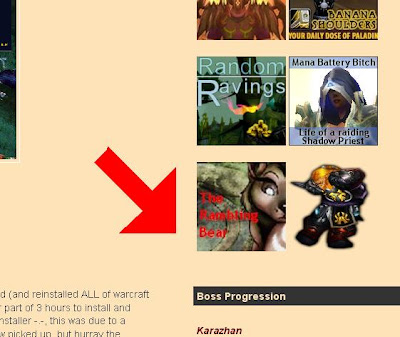 /Hug A new Rogue Blog for you all to read - His blog covers his adventures as a dwarf (*snigger*) rogue, A well written and even better presented blog its definitely worth a look in

and i have also recently discovered The Rambling Bear! She who dares blog about what no other blogger has blogged before!...well, maybe not, but all her (I'm saying her, but we all there are no girls on the interwebz) her posts are well written and usually have a fair bit of humour about them.

In other News, My life is getting hectic again, i have coursework due in for Tuesday morning that just needs that last little *push* to get finished that i have been putting off for 2 months and i have a load of revision to get done, BUT! the end is now in sight! In exactly 1 month and 5 days i will be completely done with college, after 4 painful years. My sights will be set firmly on University (after a nice long break, of course).
Posted by Sam Hadfield Posted Thursday, May 01, 2008 No comments:

Unfortunately not on Vashj, but in the other direction, We are now one step further into mount Hyjal with a (relatively) smooth Anetheron (took me 10 attempts to spell that correctly) Kill, taking us to the respectable total of 2/6 bosses down in mount Hyjal. A big grats to my Guild, and to Moofasa and Revert for their shiny lewt drops.

All in all its been a crazy few days, we cleared up SSC (with the exception of Vashj, ma bitch, of course) and i managed to obtain myself a shiny new trinket the tsunami talisman, i have paired that up with the shard of contempt (from heroic MGT)

Now with both these trinkets and both my mongoose enchants i have:-
as you can guess that's a lot of chances to procc something that increases my stats, in fact id say every mob without fail and usually more than one, so all is good on the trinket front for a while :)

Other, Even better, good news.
The Blizzard gods have finally taken action, i received this email in the week

This change has already been put into effect, and your account should again be available for play.

Should you have other questions or concerns, feel free to contact us again, via our web form: http://wow-europe.com/support/securitywebform/securitywebform.html?lan=en

We hope you continue to enjoy your experience in World of War craft!

If you wish to review our current Rules and Policies, they can be found at:
http://www.wow-europe.com/en/policy/

What a silly name to sign a official email from, but whatever

YaaaaaaY, with this i have also gotten all my gold, gear and items back, so your reading the words of one happy energizer bunny, with all this Ive had an excellent couple of days in the world of war craft i can only hope that this good streak ends soon with the downing of Vashj (or me winning the lottery tonight, either one is good).

P.S - i have assignments due in Monday morning so don't expect any more post from me until at least Tuesday night, probably later as this is my final piece of coursework in my college life, I'm looking forward to getting drunk to celebrate.

Sam Hadfield
My name is Sam Hadfield, i currently am playing World of warcraft and enjoy creating stories in my head for the characters that i play. I thought i would try and write one down.